Are relief pitchers more volatile than starters? While that seems to be the case, relievers also get evaluated in much smaller sample sizes.

Statistics usually get expressed in terms of seasons. That works great for starters, but not so well for relievers. Starters throw approximately three times as many innings as bullpen pitchers in a typical season, which gives them far more time to work through their struggles.

For this reason, we compared starters in one-third of a season timeframes to relievers in full seasons. This evens the playing field to help determine which group maintains more consistency.
We identified all relief pitchers that pitched 150 innings or more from 2008 through 2010 and posted an earned run average between 3.00 and 3.50. The starters had to pitch 150 or more innings in 2010 alone with an ERA in that same range. Nineteen relievers and 17 starters met the criteria.

The starters group included CC Sabathia, Cliff Lee, Chris Carpenter and Tim Lincecum. The relievers had pitchers like Francisco Cordero, Huston Street, Brian Fuentes and Jonathan Broxton. The two groups accumulated a comparable number of innings: the bullpen group totaled 3510.2 innings versus 3602.1 for the starters. Both groups had an identical ERA of 3.25.

Based on inspection, the starters appeared slightly more volatile. None of the relievers posted an ERA over 5.00 in any of their annual timeframes. However, two starters did so in their two-month periods: Max Scherzer (6.42) in April/May and Jon Garland (5.16) in June/July. The starters failed to post a single ERA below 2.00, while the bullpen group had three: Jeremy Affeldt (1.73) and Ryan Franklin (1.92) in 2009 and Chris Perez (1.71) in 2010. 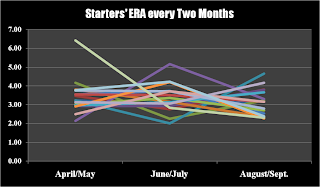 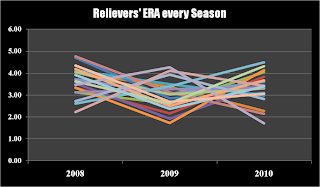 The best way to measure consistency is through standard deviation, which simply measures how much figures differ from the average. The standard deviation for the starters (.635) was slightly lower than the relievers (.677). Basically, there was very little difference in consistency between these groups.

The starters also had one huge advantage. While the relievers had an entire offseason in between their seasons, the starters flowed directly from one two-month period into the next. In several cases, the relievers changed teams and/or leagues during the offseason, making it even harder to sustain consistent performance.

Before making any conclusions, more data should be examined beyond this rather small study. It would also be valuable to examine statistics like OPS allowed, since ERA does not account for how relievers pitch with inherited runners.

Nonetheless, it appears that what some perceive as lack of consistency has more to do with the limited number of innings relievers pitch per season.
Posted by Steve Fall at 2:30 PM No comments: