A Closer Look at Goal Scorers

Sports analytics hasn’t made nearly the same impact on the NHL that it has in the NBA or MLB, but that is changing.

The MIT Sports Analytics Conference held this past March, included a Hockey Analytics Panel. Don Fishman, the assistant general manager and director of legal affairs for the Capitals, had one of the more interesting comments.

“I think even strength stats and power play stats need to be drilled down more in terms of the value of a forward,” said Fishman. “You might have a fantastic forward that the coach is playing zero minutes on the power play. And you might think he’s having a down year. But when you filter out for even strength or shorthanded, he’s actually having a wonderful year. So statistics can lie, if you’re relying on power play stats.”

The overall goal scoring leaders get impacted by both the situations in which they play and how much they play. But a couple adjustments can identify the league’s best scorers.

We ran the numbers for all skaters who saw at least 750 minutes of even strength ice time in the 2010-11 regular season (430 players total). Here is the top 10 in even strength goals per 60 minutes. 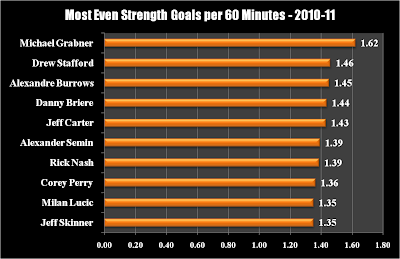 Only four of these players also finished in the top 10 for total goals scored: Corey Perry, Jeff Carter, Michael Grabner and Danny Briere. Grabner was most impressive, making the overall list despite only spending 70 minutes all season on the power play. He topped the table above with 1.62 even strength goals per 60 minutes.

Alexandre Burrows also saw limited action on power plays - which hurt his overall statistics – but shined by scoring 1.45 goals per 60 minutes in even strength situations.
Posted by Steve Fall at 6:07 PM No comments: